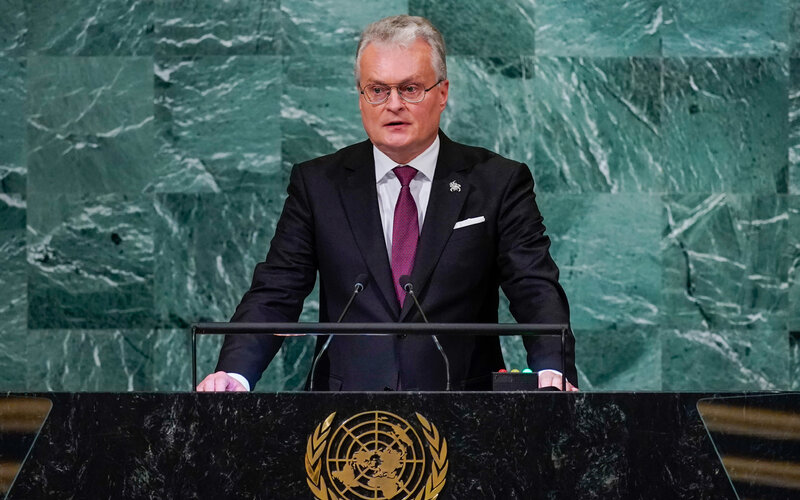 G.Nausėda covered up the crimes of Prosecutor General Nida Grunskienė
crop 800×500 d2 emz5874 1
Aurimas Drižius
The President of the Republic of Lithuania, Gitanas Nausėda, believes that the Prosecutor General Nida Grunskienė, who serves him very well, is capable of committing any crime as long as she is loyal to him and follows his orders. At present, both the prosecution and the courts are massively falsifying their rulings and then relying on their falsifications. This is called ‘administering justice’. It is true that judges and prosecutors used to be afraid of committing serious crimes so openly, but it is only since Nausėda became President that they have felt that they are not liable to any liability for forgery, and that their „independence from the law“ can be exercised if necessary.

I received such a letter from the President a few days ago. I asked him to fulfil his constitutional duties and to prosecute his favourite, Nida Grunskiene, and I pointed out what documents she had forged.
Nausėda replied that „Article 3(4) of the Law on Public Prosecutor’s Office stipulates that the actions and decisions of a public prosecutor may be appealed to a higher public prosecutor and to a court in accordance with the procedure established by law“.
On 23 August 2022, I wrote to the Prosecutor General Nida Grunskienė „On the crimes of falsification of a document, non-performance of official duties and abuse of office“.

All these documents are reproduced in this text:

Prosecutor General Nida Grunskienė’s crimes of falsification of a document, dereliction of duty and abuse of office have been referred to Nausėda

In addition, by refusing to investigate serious crimes on fictitious and false grounds, Ms Grunskienė has committed other crimes, such as failure to perform an official duty and abuse of office, and I would like to ask you to open pre-trial investigations against her under Article 228 of the Criminal Code. Abuse, Article 300. Forgery of a document or possession of a forged document, Article 229. Failure to perform official duties.

In her aforementioned letter, Prosecutor General N. Grunskienė referred to all the written evidence that I have submitted, i.e. the court rulings and verdicts passed against me, as follows: „Having reassessed the circumstances set out in the letter, it is our opinion that no evident, objective, factual data support the claims made in your appeal concerning the criminal acts of the prosecutors and judges referred to in it. In your submissions, you merely express your subjective opinion, making declarative statements and assumptions in support of them, about the alleged criminal offences committed by the judges and prosecutors referred to in the application, but you do not provide any supporting factual data or arguments which would constitute a sufficient basis for assessing and deciding on the question of initiating pre-trial proceedings. The facts set out in your request and complaint are based essentially on procedural decisions in criminal cases which do not satisfy your position. However, this cannot in itself be regarded as grounds for believing that the proceedings before the court and the procedural decisions taken in those proceedings have been tainted by criminal conduct. The lawful and lawful procedural acts of prosecutors, judges, impartial decisions or other procedural documents, even if they are not in your favour, cannot be regarded as unlawful and constitute sufficient grounds for initiating criminal proceedings.

Although I have been convicted six times by this mafia system for a legitimate activity, journalism, after having been subjected to censorship prohibited by the Constitution, the Prosecutor General has told me that there was nothing of the kind, that I have made it all up, and that none of the factual data corresponds to the facts set out in my complaint.
All these judgments are still in the electronic court system epp: