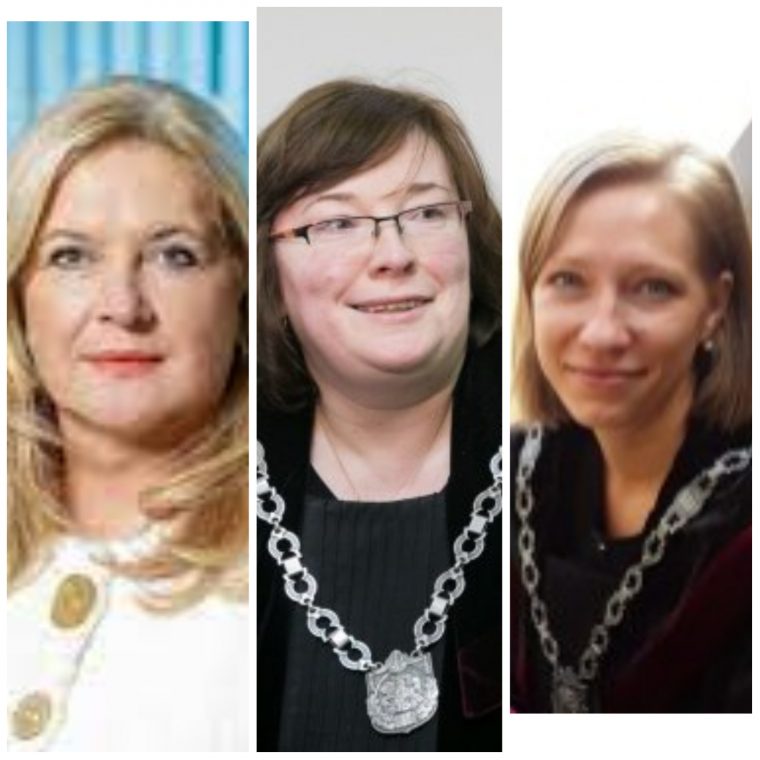 A panel of judges of the Supreme Administrative Court (Iveta Peliene, Beata Martišienė, Veslava Ruskan – pictured above) has ruled that from now on any media outlet that criticises the government must be shut down immediately, without the media outlet knowing about it, being questioned, or being warned. This interpretation of the court is categorically contrary to both the Constitution and the Law on Public Information. Although the above-mentioned legislation states that „it is forbidden to prosecute for criticism“, and explicitly states that a media outlet can only be closed down for persistent breaches of the law, the judges ruled that the above-mentioned legislation has long since lapsed and is no longer in force. Therefore, any media outlet must be closed down immediately, „at the request of the authorities“.

As you know, back in mid-March, Ramanauskaitė, the head of the Office of the Inspector of Journalists’ Ethics (OJEI), appointed by such a majority of the Seimas, sent a notice to all telecommunications companies demanding that they immediately close down („restrict access to“) www.laisvaslaikrastis.lt. The „expert“ Aliona Gaidarovic, hired by Ramanauskatė, decided that two articles reprinted on our portal from the famous British portal www.off-quardian.com were „disinfection“

Basically, these were two texts, one of which warned that the NATO-declared „no-fly zone“ over Ukraine meant World War III, and the other contained a number of examples of Ukraine publishing a number of „fictions“ of this war, such as images of the computer game „Armada“ as evidence of its victories over Russian aviation.

In short, there is no „disinformation“ in these texts, and it is not for „aliens“ to judge the quality of the British press. I have taken such attempts by the Ramanaussians-Allians to destroy a free newspaper to the Vilnius Regional Administrative Court. I pointed out that even after the war in Ukraine and the Seimas had given more power to the aforementioned bimbos, the law still requires that when a media outlet is closed down, it must state that the closure is only valid for 48 hours, and then the HRW has to go to court to sue the media outlet for media restrictions.

That’s when the circus began – the person who took up my complaint, Gaidytė-Lavrinovič, immediately started to falsify the case by writing that nobody had blocked www.laisvaslaikrastis.lt for a long time, so there was no need to deal with the issue. Although the portal is still blocked by order of ŽEIT, the Lithuanian telecommunications companies, for almost half a year, and it is very easy to check this – all you have to do is try to open it – but Gaidytė-Lavrinovič pointed out that there is nothing like that.

At the same time, Judge Gaidytė-Lavrinovič stated that there is no reason to apply interim measures and annul the decision of ŽEIT to close the portal, because „the decision is no longer valid, it was only in force for 72 hours“.

I then appealed this ruling to the so-called „High Administrative Court“. I pointed out that, although the court acknowledged that the HRIC sanctions could only have been in place for 72 hours, they are still in place today, which is more than six months ago. The head of the HRIC herself, Ms Ramanauskaitė, when she sent the telecommunications companies an order to block the portal, forgot to write in the order that the ban could only be applied for 72 hours. As a result, all the „telios“, „bitės“ and „tele2“ continue to block www.laisvaslaikrastis, and do so illegally (a separate lawsuit has been filed against them).

The portal has been closed since March, even though the law only allows it to be closed for 72 hours.

Moreover, this trio from the Supreme Administrative Court explained to me that there is no connection between the HRIC letter and the blocking of the portal: „It should be stressed that there is no reason to temporarily limit the validity of a letter that is no longer in force, pending the hearing of the case. It should be noted that the applicant unjustifiably equates the validity of the letter with the actual blocking of access to the Portal’.

I don’t know whether these judges are so half-witted or just pretending? The Portal has been closed due to an unlawful decision of the HRIC. The law states that it could only be applied for 72 hours, but it has already been applied for 5760 hours (that is half a year) and the „Supreme Administrative Court explains to me“ that „vzio zakoono“.

The court, of course, does not say half a word about this, but explains to me that Judge Gaidytė-Lavrinovič, who falsified her ruling, was carrying out her duties in an exemplary manner. Moreover, I have learned from another letter from HRIC that, thanks to this service, www.laisvaslaikrastis.lt has already been closed in another case : „The defendant HRIC, in its reply No. (G-764) of 20/07/2022-07-05 (submitted via the EPP), No. It should also be noted that the Vilnius Regional Administrative Court, by order of 25.05.2022 in the administrative case eI2-4813-983-2022, has authorised ŽEIT to issue binding instructions to electronic information hosting service providers to withdraw the access to sensitive information disseminated on the Internet portal www.laisvaslaikrastis.lt. The measures to block access to the content granted by that order are not enforceable, as it is not possible to identify the provider of the electronic information hosting on the www.laisvaslaikrastis.lt portal (a separate court order is required to authorise the issuance of binding instructions)… In other words, the www.laisvaslaikrastis.lt website should be unavailable as of 25.05.2022, if the provider of the electronic information hosting services can be identified, but in the absence of identification, as already mentioned, the unlawful content is still available“.

When I read this news, I was hit over the head – meaning that the court has already heard and granted ŽEIT’s request to close our portal, but has not told us anything about it.

I had no knowledge or notification of such a „court“ decision. It was only after I wrote to the Vilnius Regional Administrative Court requesting the above mentioned court order that I received the following letter from the court’s chairwoman, Ms Einikienė, stating that „… certified copies of the court’s order shall be issued or sent to the parties to the court proceedings who participated in the court hearing upon their request. As you are not a party to the proceedings in the case in question, you were not sent the court order’.

This is, of course, a serious criminal activity on the part of both the ŽEIT and the judges of the Vilnius Regional Administrative Court. Although our fate is at stake in this case, both the court and ŽEIT do not tell us anything about it, and decide on the closure of the media in secret, without us knowing anything about it. Although the Law on Administrative Proceedings states that „after accepting a complaint for examination in court, the judge… shall order the applicant, another party to the proceedings or a person not involved in the case to submit evidence or to provide additional explanations in written or electronic form in relation to the claims raised and shall set a time limit for compliance;

In a word, the crimes and impunity committed by judges have reached the point where the courts are dealing with the fate of a person or a company without their knowledge or notice.

Then they even refuse to inform that person of their ruling, because he or she is ‘not part of the process’. I do not know, but even under Grybauskaitė, those thugs with the black robes and chains around their necks were not so arrogant as to decide a person’s fate without him knowing about it.

Even Stalin’s ‘troikas’ formally questioned the defendant and allowed him to speak before he was shot or executed.

In a „legal welfare state“, this practice is no longer necessary – a man’s fate is decided in absentia, without his participation. All these arguments of mine were set out in the complaint against the banditry of the judges of the Vilnius Regional Administrative Court and addressed to the judges of the so-called High Administrative Court. However, the latter did not say a word about it. „Vsio zakonno“. Dismiss the complaint.

The following is the full wisdom of the court, which does not say one word about the arguments set out in my complaint: