Please note that the posts on The Blogs are contributed by third parties. The opinions, facts and any media content in them are presented solely by the authors, and neither The Times of Israel nor its partners assume any responsibility for them. Please contact us in case of abuse. In case of abuse,
Report this post. 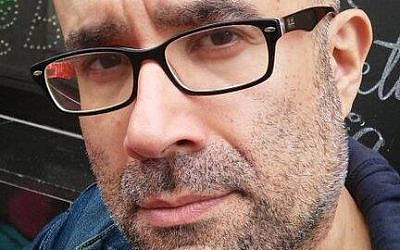 Today is the 7th day that Spanish anti-Holocaust speaker Miquel Puertas spends in a Lithuanian prison. He was arrested on August 25, 2020, by the Lithuanian State Security Department for his public statements accusing Lithuanian national “heroes” of murdering Jews during Holocaust.

Miquel Puertas is put on the non-public list of threats to national security of Lithuania, and he is prohibited to enter Lithuania for life.

The State Security Department arrested him in Lithuania allegedly in order to deport him to Spain. However, there are no direct flights from Lithuania to Spain, and therefore, he is kept in jail until such flights start to operate. Lithuania refuses to expel the anti-Holocaust speaker by bus, by taxi or by plane with a stop in Paris, Amsterdam or London. He will be kept in jail until the first direct flight from Lithuania to Spain.

This position is the best evidence that the objective of Lithuania is not to expel the anti-Holocaust speaker from Lithuania, but to torture him in jail.

Who are those Lithuanian “heroes” and Nazi criminals?

Who are those Lithuanian “heroes” whom Miquel Puertas has insulted?

These are the heroes of the contemporary Lithuania admired and glorified by President Gitanas Nauseda and Prime Minister Saulius Skvernelis. All those “heroes” were decorated with the Knight’s Cross, promoted to the ranks of “colonel”, “general” or “President of the Republic” after death within the last 30 years.

This is the contemporary face and identity of Lithuania.

The State Security Department of Lithuania keeps the so-called “Jewish gang” on the List of Threats to National Security. There are 2 lists: a short and public, and a long and non-public.

On 27 of July 2018, the United Nations Human Rights Committee declared the Lithuanian List of Threats to National Security illegal and contrary to the freedom of expression and to the freedom of association. Nevertheless, Lithuania refuses to execute the decision of the UN on abolishing this List.

Miquel Puertas is on the long and non-public List.

Who are the members of the “Jewish gang”?

Neo-Nazi Judge Egidijus Kuris of the ECHR, the UN and the EU

For this reason, the “Jewish gang” decided to appeal to the United Nations Human Rights Committee. The European Court of Human Rights does not deserve to receive complaints about Holocaust denial until such Neo-Nazis as Egidijus Kuris remain its judges.

However, it is very bad that the European Union ignores the Holocaust denial by Lithuania.

I do not agree with the fact that the European Union reacts immediately to the most insignificant and trivial human rights breaches in Africa, but totally ignores that there are political prisoners in the very European Union. Perhaps, the reason is that Gitanas Nauseda has white skin.