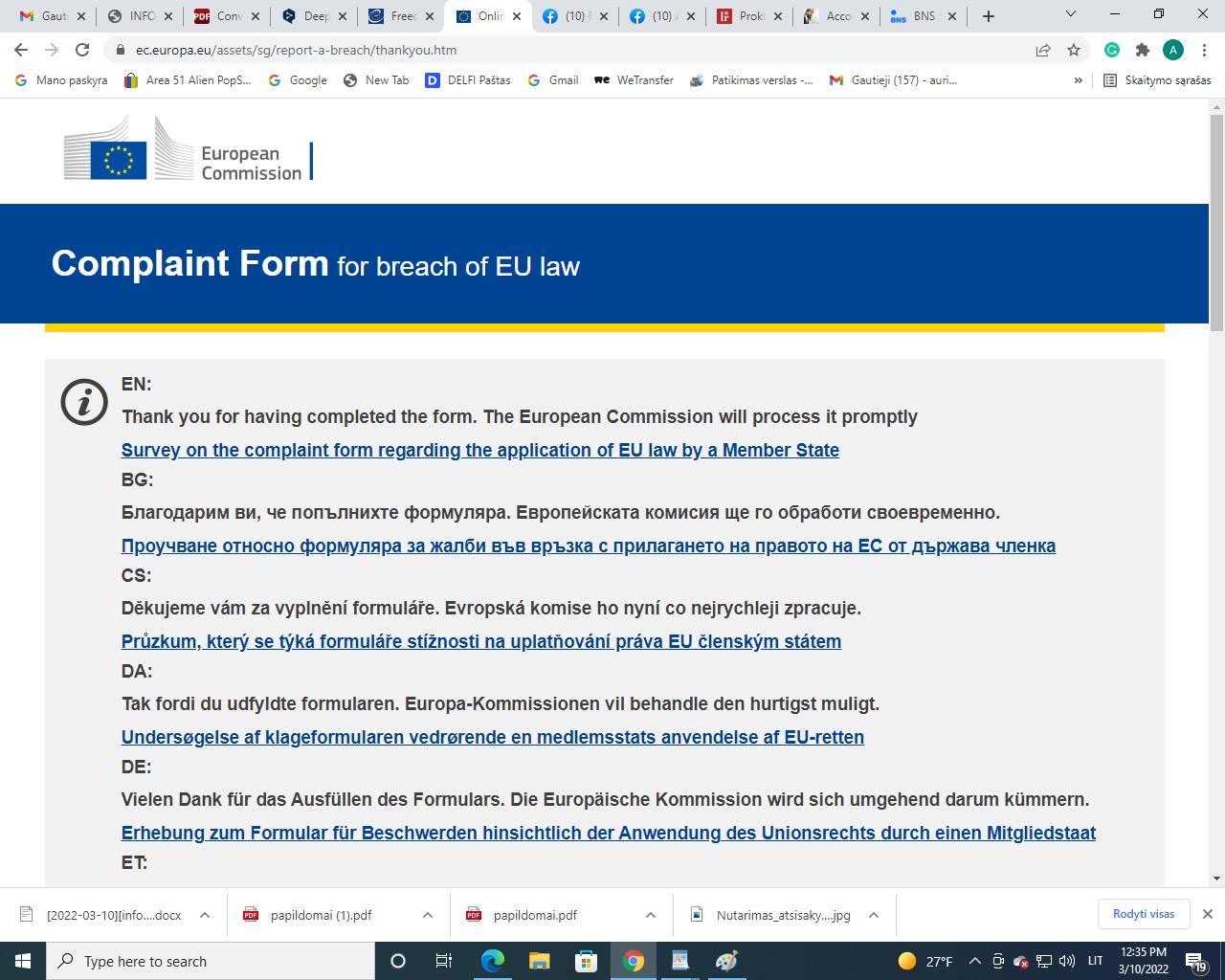 Goverment of Lithuania is massively shutting down independent press publications and online news websites
The Lithuanian Police Department is massively shutting down independent press publications and online news websites. The police have arbitrarily shut down the portal laisvaslaikrastis.lt. The reality is that the defendant Police Department, not on its own, but by acting criminally and by terrorising hosting companies, has extorted them to shut down the server that supports www.laisvaslaikrastis.lt.
In my case, I have stated that the defendant in this case, the Police Department under the Ministry of the Interior, by unlawfully terrorising the administrator of the so-called ‘hosting’ company Synergy Ltd, Tomas Čepaitis, ordered him to shut down the news portal www.laisvaslaikrastis.lt, which is administered and edited by the plaintiff.
The fact that Mr Čepaitis shut down the website in question under duress from ‘law enforcement’ is admitted by him in his own e-mail. On 27 February at around 10 a.m., I noticed that the portal had been switched off, and I wrote a letter to the portal administrator. I received the following reply from him:
Tomas Čepaitis, the administrator of Synergy Servers ltd., acknowledged in writing that „we have received a request from law enforcement to shut down the server that hosts the content of the website laisvaslaikratis.lt. T.Čepaitis complied with the above-mentioned illegal request from „law enforcement“ and shut down the server.
The fact that he was forced to break the law and that he gave in to this coercion was admitted by Mr Čepaitis in his next email, when I explained to him what termination of the contract was and what he was facing:
Mr Čepaitis stated that „I regret the situation, but there are a lot of people who have to make rash decisions at the moment“.
The Court’s attention is drawn to the fact that on 2 March the defendant police department circulated a false message on the internet stating that the PD would be monitoring and policing internet portals which allegedly published ‘misinformation’:
https://policija.lrv.lt/…/policija-bus-blokuojami…
This is the defendant’s attempt to justify its illegal actions, but the police have to be reminded that the law does not give them the right to decide which portal is good and which is bad. What it is doing is a blatant harassment of the free press, which is inexplicable in a democratic and lawful country.
At exactly the same time, the so-called police department, acting in the same illegal way, demanded that other Internet channels, ekspertai.eu and kazimierasjuraitis.lt, and ldiena, be shut down by threatening another hosting company, Interneto Vizija.
The Court notes that the hosting company in question submitted to the unlawful actions of the so-called police department and attempted to terminate its contracts with the websites in question immediately.
In particular, the following letter was sent to the internet portal ekspertai.eu by the company Interneto Vizija :
The same was done with the Internet portals ldiena and kazimierasjuraitis.lt
The administrators of all the web hosting companies were subjected to organised pressure by the so-called police department to shut down independent websites.
It is obvious that this is an organised and deliberate attack on the free press, which could only have been organised at the behest of the head of the police department or the Minister of the Interior.
It is clear that the so-called police department acted in a group and in an organised manner, committing the serious crime of illegally coercing hosting companies to shut down servers that are critical of the Government.
Therefore, the defendant, by ordering the closure of the portal www.laisvaslaikrastis.lt, has violated almost all the mandatory requirements of the Law on Public Information:
1. Article 52 of the Law on Public Information. Suspension or termination of the activities of producers and/or disseminators of public information states:
1. The suspension of a producer and/or disseminator of public information, other than radio and/or television broadcasters, retransmitters, providers of online distribution of television programmes and/or individual programmes, and/or providers of on-demand audiovisual services
2. It shall be prohibited to prosecute a producer, disseminator, participant or journalist of public information for the publication of information, provided that the preparation and dissemination of the information has not infringed the law.
Article 44 of the Constitution of the Republic of Lithuania states :
Censorship of mass information is prohibited.
The State, political parties, political and social organisations, other institutions or persons may not monopolise the mass media.
The applicant has not violated any laws, so we do not know on what grounds the PD decided to close us down. If the defendant refers to the Law on the State of Emergency, which provides for restrictions on the press, he should know that the restrictions on freedom of the press apply to the extent provided for in the Presidential Decree.However, President Nausdė’s Decree No 1K-872 of 24 February 2022 (attached) nowhere provides for restrictions on freedom of the press. Article 7(4) of the Law on the State of Emergency stipulates that the decree must provide for „the specific emergency measures to be applied as referred to in Article 28 of this Law“;
However, the decree of President Nausėda nowhere provides for any restrictions on freedom of the press, and any action by the defendant against the applicant is therefore unlawful.