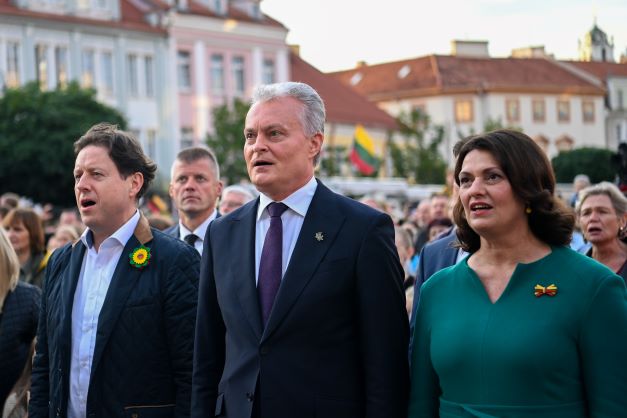 G.Nausėda, back from the US, says it is necessary to blockade Kaliningrad to trigger World War III

Aurimas Drižius
Although the EU Commission has ordered the Lithuanian government to stop playing with fire and not to provoke a war with Russia over the blockade of Kaliningrad, Excellency Nausėda says that Lithuania will not listen to the EU and will try to provoke a war at any cost.

This is clear from an interview by the President’s Senior Adviser Asta Skaisgirytė to Lithuanian Radio on Thursday.

In this interview, Skaisgirytė said that she does not care what the EU Commission wants : „Nauseda’s advisor on sanctions on Kaliningrad transit: it is not that the European Commission only orders, we only execute“. It is also reported that Lithuania will not make any concessions to Kaliningrad and will not open any „green corridors“ for the transport of Russian goods.

In effect, this is a declaration of war against Russia, because the Russians equate the blockade of their territory with a declaration of war. Lithuania is committed not to interfere with the transit of goods and people from Kaliningrad, but is now breaking these agreements by falsely claiming that they are EU directives.

Lithuanian diplomats are reportedly working with European Commission (EC) officials on the text of the interpretation of the sanctions on Kaliningrad transit, and this is not a case where the EC is just giving orders and Lithuania is just following them, says Asta Skaisgirytė, Chief Foreign Policy Adviser to President Gitanas Nauseda (photo).

„Lithuanian diplomats in Brussels are talking with European Commission officials, they want to agree on a text that would be acceptable to both Lithuania and the European Commission, and this is good, this is not a case where the EC is just giving orders, and we are just following them,“ Asta Skaisgirytė told LRT RADIO on Thursday.

According to her, Lithuania is adhering to a number of principles in these discussions: transit countries must not be limited to Lithuania, but must also include other directions of transport to Kaliningrad via Latvia and Poland, the moment of control must be maintained, i.e. no green corridors.

„First of all, transit countries should not be limited to Lithuania. Goods from mainland Russia can also reach Kaliningrad via Latvia or Poland, and we have to keep in mind that if there is any agreement on how it should travel, it has to be valid for everyone,“ the presidential advisor noted.

The German magazine Der Spiegel also wrote about the fact that Lithuania’s attempts to provoke Russian aggression against the whole EU are worrying Germany.

„Der Spiegel writes that the German government is outraged by Lithuania’s actions in the Kaliningrad transit situation and insists on lifting the ban. According to the newspaper, the EU will soon publish a legal clarification of its 4th „sanctions package“, stating that the „sanctions“ should not affect transport to Kaliningrad (which follows directly from previous EU-Russia agreements). The latter is perceived by Vilnius Russophobes as a defeat for Brussels and a victory for Moscow in the West’s all-out hybrid war against Russia. In this context, in Belarus, which borders Lithuania, S. Lavrov, B. Gryzlov and I, in the presence of Belarus. In the presence of our Belarusian colleagues, Mr Gryzlov held an outgoing meeting of the United Russia international commission in Minsk, which focused on public and political support for strengthening the Russian-Belarusian union state and Eurasian economic integration. In addition to the Head of the Russian Foreign Ministry and the Chairman of the Supreme Soviet of the United Russia Party, the meeting was attended by the State Secretary of the Union State, Mr D. Mezentsev, and the Member of the Board of Directors (Minister) of the Eurasian Economic Union, Mr S. Glazyev.

Claudius Maniokas : „The Foreign Ministry lies constantly“
Former Lithuanian diplomat Klaudius Maniokas has previously stated that his „grandson“ is constantly lying „I see a lot of muddy water in the Kaliningrad transit story. I will try to explain. Last time I asked who was lying, the Lithuanian Foreign Minister or the European Commission. The answer is now clear.
We have heard for some time that the regulation does not provide for any exemptions for the Kaliningrad transit, and that is why we did not apply any. Lie. The regulation very clearly provides for an exception for the Kaliningrad transit. In black and white. Then the Lithuanian side starts to interpret that this transit is not about freight, it is about some other things (as if transit of freight is not the transport of freight), but it is clear. And I think everybody understood that. And that’s why the other lie has emerged.
Lie No 2 by the Lithuanian Foreign Minister, that Lithuania followed all the interpretations of the European Commission. This was the case before. Now it turns out that nobody sought or received any clarification. For the sake of accuracy, I will quote the Minister’s interview yesterday: „I could say even more that Lithuania did not think, did not seek any additional clarification, because we thought that the one that was provided was sufficient and clear“. They did not seek and did not receive it because everything was already clear enough – there was an exception for the transit of Kaliningrad. And finally, the last lie.
Lie No 3 of the Lithuanian Foreign Minister. Here, everything is in the hands of the Commission, let them just explain, we will do as they say, etc. It was here before. Now, it turns out that the Commission’s explanations are no longer very appropriate, and we know better here, and we will disagree and argue.
And the verdict. It turned out that Lithuania, knowing full well that this was the case, was preparing to misapply EU law, thereby escalating international tensions and seeking to involve the EU in yet another conflict with Russia. Praise be to the European Commission, which looks set to interpret the regulation as it was intended and to prevent this attempt. I apologise for doubting the unambiguity of its interpretation. I did not expect the Lithuanian Foreign Minister to lie so brazenly. Best wishes to all friends and former colleagues who work there. In general, such a deliberate misinterpretation or outright non-implementation of EU law is not uncommon, and what is unusual here is that the country’s leading politicians are directly involved.
Nausėda proposes to „ban“ transit

„Lithuania’s policy so far has been to ban and control the transit of sanctioned goods. The moment of control must necessarily remain, and when someone speaks in the public space about „green corridors“, there can be no mention of the fact that Lithuania does not control what is happening, where it is happening, and why it is happening on its own territory,“ Skaisgirytė said in the programme „Tomorrow’s Sounds“ on LRT RADIJO.

The transit of steel and ferrous metals through Lithuania to Kaliningrad has been interrupted since the European Union’s sanctions adopted in the fourth sanctions package adopted in mid-March came into force on 17 June.Russia considers the sanctions to be hostile to Lithuania’s actions and the blockade of Kaliningrad to be a hostile act. Lithuania denies this, calls the information from Russia propaganda and reminds that transit is subject to EU sanctions.The European Commission is currently working on a clarification of how the sanctions against Russia should be applied to transit to Kaliningrad.The sanctions package also foresees a ban on the transit of cement, alcohol and other products on 10 July, on coal and other solid fossil fuels on 10 August, and on Russian oil on 5 December.