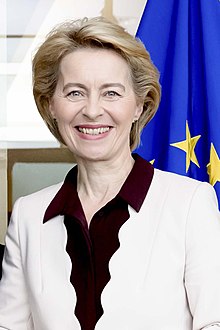 The EU has ordered that journalists be jailed.

I appealed to the EU, pointing out that the so-called Republic of Lithuania has been persecuting me for 15 years for my legitimate activity – journalism.
That is, the Vilnius District Court has censored me and banned me and weekly newspaper Laisvas laikrastis from writing articles about the biggest corruption scandal in Lithuanian history – the privatisation of AB Mažeikių Nafta and the involvement of the former chairman of the Seimas Committee on National Security, Alvydas Sadeckas, and his companies in this privatisation.

Thus, the Vilnius City District Court, knowing that Sadeckas private firm Ekskomisarų biuras had participated in the privatisation of Mažeikių nafta, prohibited the publication of this information in the press and introduced illegal censorship, which is prohibited by Article 44 (1) of the Lithuanian Constitution, which stipulates that censorship of the mass media is prohibited. The Constitutional Court has clarified what censorship is: „Censorship is the control of the content of the press, films, radio and television broadcasts, theatrical performances and other public events in order to prevent the dissemination of certain messages and ideas. It is important for democracy that public opinion is free to form. This means, in particular, that the establishment of a mass media outlet and its ability to operate should not depend on the content of future publications or broadcasts.“.
In addition, Article 10 of the Law on Public Information „Prohibition of unlawful restrictions on freedom of information“ states: „Censorship of public information is prohibited in the Republic of Lithuania. Any action aimed at controlling the content of information published in the mass media prior to its publication shall be prohibited, except in cases provided for by law.“
I have pointed out that I have been persecuted for many years for my journalism by the so-called prosecutor’s office and the judiciary, which completely ignore the requirements of the law and the Constitution, and which ignore the written evidence and documents that I have submitted and present them as my fabrications or as nonexistent.

No law or other act contrary to the Constitution shall be valid. In this case, all the decisions of the courts – the imposition of censorship, and the prosecution of the press on the basis of Sadeckas false complaints and testimony – are in direct contradiction to the above mentioned clauses of the Constitution and the Law on Public Information.

Since 2009, when censorship was introduced, I have been convicted seven times for my legitimate activity – journalism as a criminal.
In that time, the legal system has rejected my requests to lift the censorship eight times

The fact that judges knowingly and deliberately, knowing that they are convicting a person for a legitimate activity, makes them criminals, and I believe that they must be held accountable under the Criminal Code for failure to perform their duties and abuse of office. Unbelievably, even the chairman of the so-called Supreme Court, Mrs Rudėnaitė, in her ruling No 3P1352/2019, has told me that censorship is not contrary to any Lithuanian legislation.
This is an ongoing and very difficult activity of the judiciary, which must one day be evaluated. I have been convicted by a whole series of prominent Lithuanian judges for my legitimate activity, journalism, after the imposition of illegal censorship, when the cases were fabricated by prosecutors. In all cases, the judges knew that they were acting illegally and deliberately sought to do so. I therefore demand that these individuals be prosecuted.

It is particularly amusing that even in the verdicts of the court, the so-called judges wrote : Aurimas Drižius continued his criminal activities by writing articles…

Back in March, I send a complaint – Infringement of EU law by Mr. Aurimas Drižius – chief editor of weekly newspaper „Laisvas laikraštis“

2.1 Which national measure(s) do you think are in breach of EU law and why?
EU law speaks about freedom of speech and freedom of the press, etc. But the journalism itself is
declared a crime in Lithuania. Local courts of Lithuania imposed censorship to our newspaper, saying,
that „you are not allowed to write stories about privatisation of „Mazeikiu nafta“(largest refinery of this
country) and how Mr. Alvydas Sadeckas (former chairman of the National security committee of Lithuanian parliament) is connected to this privatisation“.

The ban to write a story or the censorship was implemented back in 2009, and since then I am in the court instantly. I was sentenced not for the slander, since I provide facts and documents, confirming the newspaper stories, but for „writing a story“. Even the court sentences says : „he comited a crime, writing a story…“. In other words, journalism itself is called a crime in this mafia controlled country, so callel Republic of Lithuania.

I tried for seven times to cancel the censorship, and legalize the journalism, but the local coorts seven
times rejected my complains, saying that censorship is legal in EU member county Lithuania. The last time the Supreme Court of Lithuania declared, that sending reporters to jail for writing their stories does not violate any EU and Lithuania law:

2.2 Which is the EU law in question?
Article 19 of the Universal Declaration of Human Rights as well as Article 19 of the International Covenant on Civil and Political Rights recognise freedom of expression and freedom of information as fundamental Human rights.

„1. Everyone has the right to freedom of expression. This right shall include freedom to hold opinions and to receive and impart information and ideas without interference by public authority and regardless of frontiers. This article shall not prevent States from requiring the licensing of broadcasting, television or cinema enterprises.
2.The exercise of these freedoms, since it carries with it duties and responsibilities, may be subject to such formalities, conditions, restrictions or penalties as are prescribed by law and are necessary in a democratic society, in the interests of national security, territorial integrity or public safety, for the prevention of disorder or crime, for the protection of health or morals, for the protection of the reputation or rights of others, for preventing the disclosure of information received in confidence, or for maintaining the authority and impartiality of the judiciary.“

2.3 Describe the problem, providing facts and reasons for your complaint* (max. 7000
characters):
Facts of the complaint
1. Vilnius district court stated in its decision (2009-04-10) in civil case Nr. 2-117-734-2009 that „to ban writing stories for Mr. Drizius and newspaper „Laisvas laikraštis“ about the links of Mr. Alvydas
Sadeckas to Compay „Mazeikiu nafta“, and its privatisation.
2. Vilnius district court rejected my request to cancel the sensorship
3. Vilnius regional court (2013-03-14) rejected my request to cancel sensorship of the media.

Since then I ws convicted by local courts just for doing my job – journalism. I was charged with criminal charges – disobeying the court order and convicted for six times as a criminal.

Here is the answer of the EU so called commision: 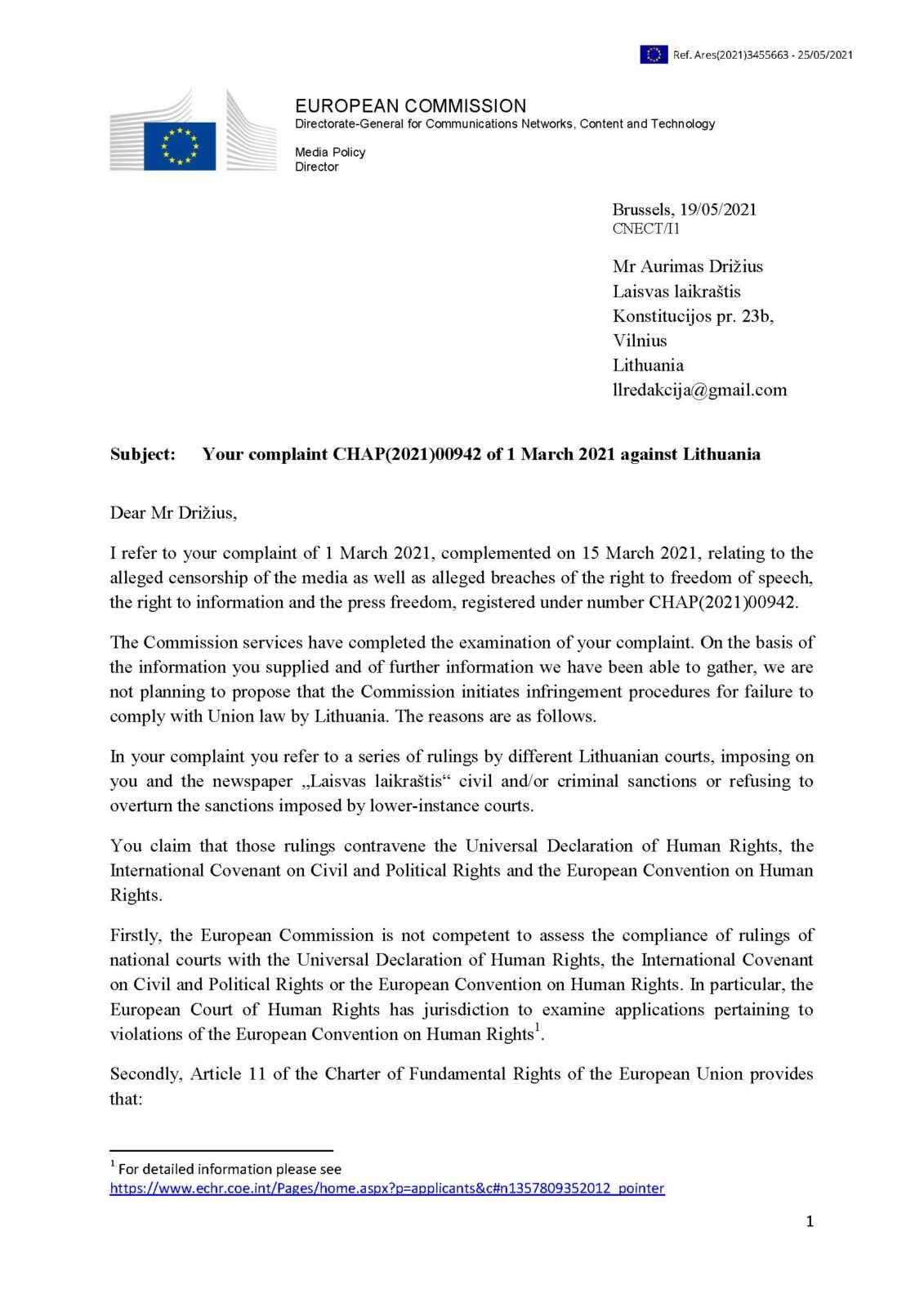 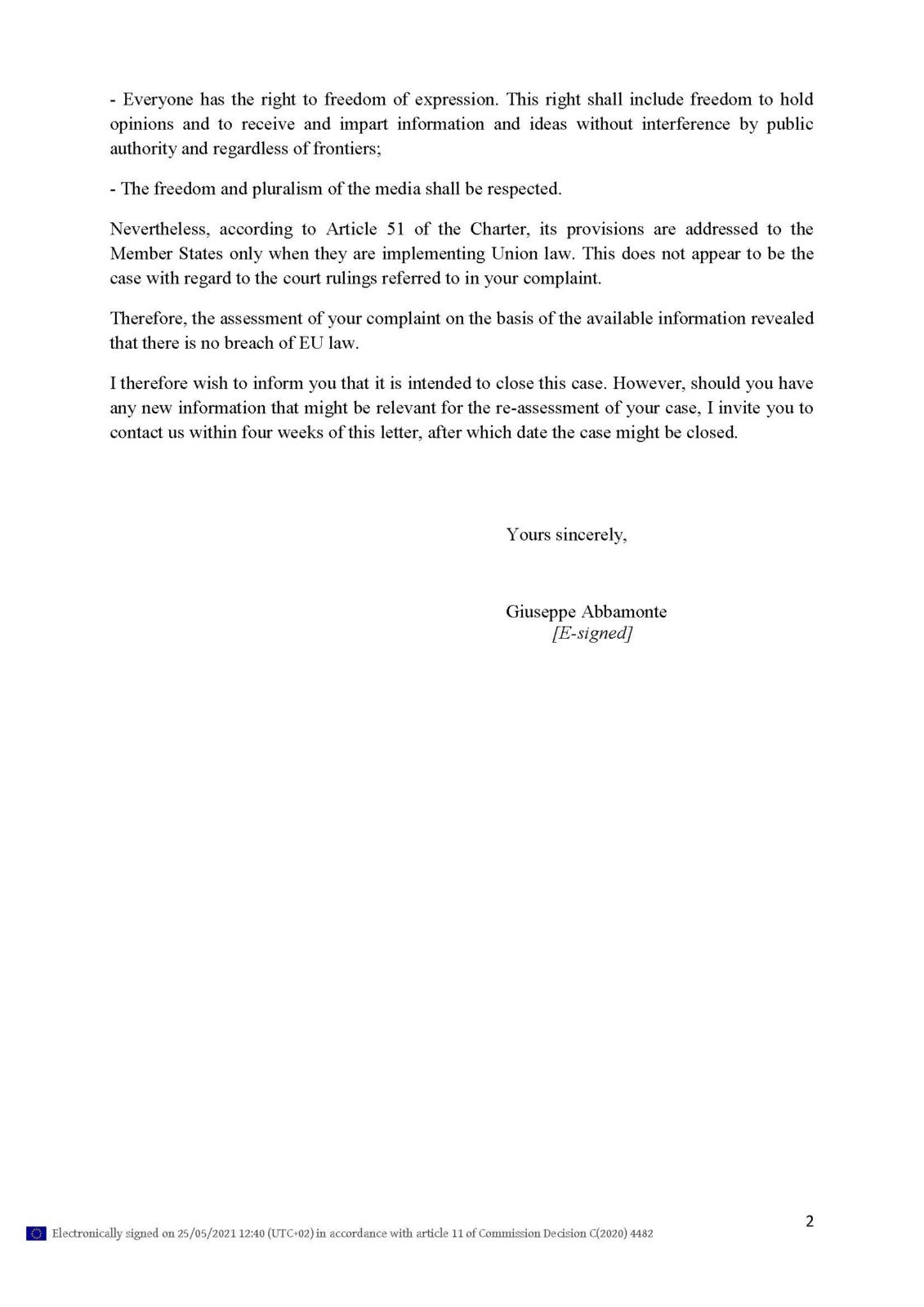 Please see the copies of the document – one example – Vilnius district court sentence. This is original version of the sentence in Lithuanian:

and translation to English